Busy Things hosts over 900 award-winning educational games and activities for children between the ages of 3 and 11. A wide range of subjects are covered including maths, literacy, science, coding and phonics. The phonics area is designed to help parents teach their children to read. Our fabulous collection of over 60 phonics games are all designed around the government-endorsed Letters and Sounds programme. If you play our phonics games at home you will be supporting your child’s reading and spelling at school!

To get the most out of our games you are going to need to understand some the basic phonics terminology. These are terms used by teachers and children alike, so don’t be scared to use them with your child.

Phonemes – the separate sounds that make up words.

Graphemes – the written letters that represent a phoneme.

Grapheme Phoneme Correspondence – this basically describes a phoneme and it’s matching grapheme together, and is usually abbreviated by teachers to ‘GPC’.

If you would like to become a Phonics geek you can read more about the technical side of phonics and its teaching in our blog How Playing Phonics Games can Improve your Child’s Reading. 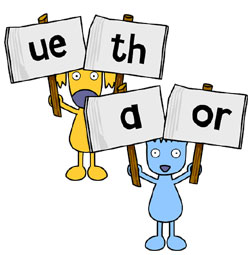 Within our phonics area, our characters Dog and Cat are your hosts, who, through crazy antics and a quirky sense of humour, lead children through the entire process of learning to read. At the start, they gently ease children into listening for the difference between all kinds of sounds. This helps to prepare the way for discrimination between the specific sounds that make up the words we speak.

This means that children are becoming fluent in the mechanics of reading and writing even before they have learnt all the letters and their sounds.

To begin, our games get children interested in listening for differences in sounds – and for discriminating between the sounds within individual words.

Our early games invite children to listen carefully to animal sounds, instrumental sounds  and even sounds such as stamping and clapping.

Cat is hiding under the polystyrene pellets! The sound coming from Dog’s flashing detector hat changes according to how close he is to Cat. The sound increases in volume, pitch and tempo the closer he gets. If the children listen carefully, they will be able to uncover Cat!

Introducing letters and their sounds

Children progress from listening carefully to every day sounds to listening to letter sounds.

In Sound Seek, Cat magically introduces and demonstrates the writing of new letters (graphemes). The matching sound (phoneme) is contained in one of the boxes. The child must find the sound that matches the letter or letters.

In Scribble and Spell, Dog carefully paints a picture that represents a word.  The child must try to build the word from the available letters (graphemes).

Uh-oh! There’s more than one way to spell the same sound!

Once the full range of letters and sounds are in the bag – and only then – Dog and Cat, hold your hand as they introduce the ground-breaking idea that is accepted by us fluent English speakers, that there is more than one way to spell the same sound, and that some sounds can be pronounced in more than one way! New spellings of sounds already learnt are slowly introduced until your child is equipped to deal with new words with confidence.

In this whack-a-mole game, splat all the words that contain the target sound (phoneme), regardless of the spelling, in this case ‘ai’.
In Monster Cannon, find the correct sound (phoneme) for the target letter (grapheme) to launch the monster out of the cannon. Is it ‘y’ as in ‘yoghurt’ or ‘igh’ as in ‘fly’ or even ‘ee’ as in ‘hairy’?

Some words are just plain tricky!

All the way through, children are introduced to a few common words that are do not use the letters and sounds they have learnt so far. This means they can begin making captions and sentences. These common words are dubbed ‘tricky’ words by teachers because they are hard to ‘decode’ into the sounds learn’t so far. Dog and Cat have a number of games that focus of practising these tricky words and composing and reading whole sentences.

In Words And Wigs, listen to the word the cardboard robot says and pick it out from the words Cat is holding. If you’re right the robot will produce a comedy wig. This game builds familiarity with those more difficult common words.

As children develop more confidence they can begin to build sentences from words that are becoming familiar to them.

Once their reading becomes more fluent and words become less scary children can move on to enjoying and playing with words. They can have fun with exploring and recognising homographs (‘row’ as in boat and ‘row’ as in argue) and homophones (‘right’ and ‘write’) and recognising compound words such as ‘teatime’, ‘beanstalk’ and drainpipe’.

Busy Things  hosts over 60 award-winning phonics activities to help you teach your child to read. In addition to phonics, we have a huge selection of activities and games exploring other subjects, including English, Maths, Science, Geography, History, Coding and Art. You can start supporting your child’s learning today, by trying Busy Things for free!

Learn more about phonics teaching methods in our blog How Playing Phonics Games can Improve your Child’s Reading.